Warning: Parameter 1 to wp_default_scripts() expected to be a reference, value given in /homepages/36/d543842676/htdocs/clickandbuilds/MyStylist/wp-includes/plugin.php on line 601
 Fusion Maia - Day 1 - MyStylist

Ho Chi Minh City was hot. Hotter than Bridgetown but definitely cooler than Jeddah. There was a polite humidity that I wished all tropical climates had. Perhaps it was just an early morning thing. The arrivals terminal was busy. Friends, relatives and loved ones peered through the glass doors looking for a familiar face. The disappointment on their faces when we came through was striking, but it quickly mellowed into a sweet curiosity. A curiosity that I was going to have to get used to quickly. Besides, I probably was worse growing up on a tiny farm in the middle of nowhere and all that.

The instructions to the domestic terminal were seemingly straightforward. “Out through the door, turn right and walk for five minutes.” We walked for five minutes, past a Burger King and two signs pointing to the departure lounge and a flight of stairs. There was no lift in sight, so up the stairs we went.

On the first floor was the “well-wishers lounge.” I remembered my seven-year old self waving my brother off to England at the old Harare International airport, tears streaming down my face and yet he turned and waved enthusiastically at us. I didn’t understand why; I was certain he was going to be attacked by a shark! I have not seen a well-wishers lounge since, perhaps because of my limited travelling. Friends and relatives crouched or sat crossed legged, their heads pressed against the glass as they watched people check-in and proceed to queue for another hour or so. They probably sat there for up to two hours before their loved ones finally disappeared to the other side. Still, they stayed, sitting or crouching comfortably, complete masters of their bodies.

Our bags were already checked in so we joined the queue to go through security. About 15 minutes later it was our turn. That’s when we found out we were still in the international terminal! We had walked for five minutes, but slowly. With renewed purpose, we set out for the correct terminal, and found it. We cleared security in less than ten minutes and had about an hour’s wait before boarding. Naturally I went shopping.

My favourite pair of sandals broke after serving me a good three years and I didn’t get a chance to replace them before travelling. I went in search for a good pair of sandals that would at least last me the eight days I was going to be in Vietnam.  I tried a pair of size 39 sandals out of politeness. The shop assistant was quick to offer me a size 40. That’s when the joke started, “long foot.” They only made a size 40 in a jarring blue leather sandal and that was too small for my “long foot.” They did not make a size 41. The whole experience was funny. She was trying to be polite and failing miserably at hiding her surprise at my “long foot” and I, on the other hand, was also failing miserably at hiding my amusement.  In the end I bought a pretty beach dress made out two square scarves.

Da Nang was a lot cooler. It was covered in a grey cloud. My heart sunk. It was about eleven thirty when we arrived at Fusion Maia in a taxi. She is tucked away between other resorts in the Khue My area. With the adjacent resort towering above her, and hidden in foliage, Fusion Maia is a true hideaway.

We received a very warm welcome and our luggage was quickly taken away in true five-star fashion. The pastel colours in reception were soft on the eye, neatly arranged fresh flowers graced both desks. Everything was just right, tricking the mind into relaxation mode. Our Fusionista was waiting for us, he introduced himself and made a promise about the weather! Everyone had genuine smiles and I wondered if they would last. Soon we were ushered to our villa.

Our bags had already been dropped off. There was a box of complimentary cookies on the coffee table and a handwritten welcome note from the general manager. A bouquet of fresh flowers sat on the desk, surrounded by neatly arranged stationery and guides. All this seems standard for  any hotel room let alone a resort so you are probably wondering why I am mentioning it? There was a personal touch to everything that I can’t describe in any other way. Everything was perfect.

After having a much needed shower, we ordered some lunch. Marcus had a beef burger and I, the chicken and coconut rice to no regret. I was sure to revisit this dish at least once again before leaving. Once the business of lunch was out of the way, we had an hour to nap before our first complimentary spa treatments which we booked a week in advance. The alarm took care of the time.

On arrival at the spa, we were greeted with more warm smiles and bowing then ushered to the changing rooms where we changed into robes and slippers. Everything was tranquil. There were orange daisies dotted everywhere around the spa to match the ones floating in the fountain just outside. The spa garden and its expansive pool spread right in front of us: beautiful, peaceful and inviting. We were offered a glass each of water infused with the fruit of the day, an induction into the complementary natural living programme.

Within a few minutes, we were introduced to our therapists. In anticipation of the long flight, clogged pores, fatigue and potential insomnia, we both booked a coconut body scrub followed by a Thai stretch release massage. We emerged 2 hours later refreshed, rejuvenated and skin glowing from the coconut scrub. The Thai massage took care of the fatigue, leaving us both feeling well rested even though we had been travelling for 15 hours. I for one was looking forward to reaping the benefits at bedtime. Before heading back to our room we sat with a spa consultant and booked our treatments for the next day.

The sun set around six. Dinner was brought to our room within an hour and we were off to bed. 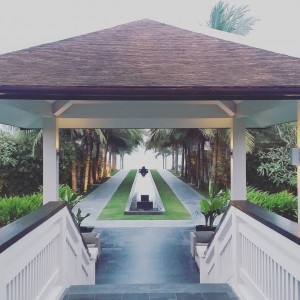